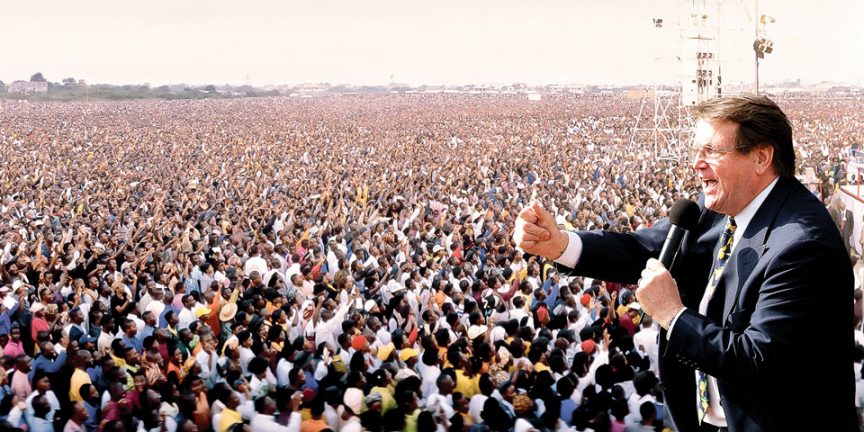 Reinhard Bonnke – one of the world’s greatest ever evangelists – has died. Dubbed the ‘Billy Graham of Africa’ having led 79 million people to Christ at historic mass gospel campaigns, Bonnke leaves an unparalleled legacy of service to the kingdom of God.

The German passed away peacefully on December 7 after a lengthy battle with cancer. He was surrounded by his family, and a packed memorial service was held in Orlando last month.

Bonnke is best-known for his Christ For All Nations gospel outreach campaigns throughout Africa. He and his team pioneered mass evangelism and in the process drew some of the largest live audiences in history. In November of 2000, at a single meeting in Lagos, Nigeria, 1.6 million attendees heard him preach. Huge crowds assembled in almost every nation in Africa, and it is no exaggeration to say that his work transformed the spiritual life of the continent.

The scale of these events made them visible in every sector of African society. And, though the campaigns were controversial, even dangerous in some environments, Bonnke’s persistence and humility engendered favour everywhere God sent him.

As former President of Nigeria, Olusegun Obasanjo said, “With the prayers of people like Bonnke Nigeria will succeed.”

Bonnke also authored more than 40 books, taught widely throughout the body of Christ, appeared regularly on Christian television and inspired countless believers to act in bold faith and live with passion for God.

His undeniable influence continues to affect church leaders and congregants around the world.

This article was taken from the February 2020 issue of Direction Magazine.

This article is from Direction Magazine. Click below to find out more about the latest issue.